On Friday, May 15, the Office of Academic Affairs hosted a reception celebrating math education at CUNY and honoring the student winners of the 2015 CUNY Math Challenge as well as the faculty of the inaugural Calculus Boot Camp.

In her opening remarks, Interim Executive Vice Chancellor and University Provost Julia Wrigley welcomed the audience and noted the importance of math at CUNY. She spoke about Math Matters, a university-wide initiative supporting all levels of math education, from remediation to pre-calculus to the highest levels of scholarship. The Math Challenge and Calculus Boot Camp, she said, are two examples of how Math Matters is promoting excellence and achievement in the teaching and learning of math at CUNY. 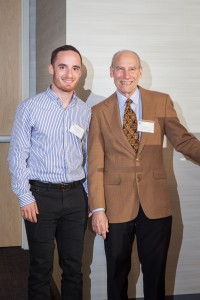 CUNY Math Challenge Committee Chair and Queens College Professor Ted Brown, who is also the executive director of CUNY Institute of Software Design and Development, spoke about the sixth annual Math Challenge, which engaged hundreds of undergraduate students from CUNY campuses across the city. He explained how this year’s competition took place in four rounds, featuring questions of increasing degrees of difficulty. The first and third rounds were conducted online, and the second and fourth consisted of in-person exams. Twenty-one winners, hailing from ten different community and senior colleges, received cash prizes and were presented with certificates of achievement during the reception. Grand Prize winner Gabor Horowitz, a senior at Brooklyn College, spoke about his love for math problems and his appreciation for the Math Challenge as an opportunity to be inspired by fellow CUNY students. See the full list of winners and their bios.

Mari Watanabe-Rose, a senior research associate in CUNY’s Central Office, spoke about the inaugural Calculus Boot Camp, which took place in July and August 2014 and provided hundreds of CUNY students with the opportunity to enhance their math skills before enrolling in calculus courses in the fall semester. Watanabe-Rose presented certificates of appreciation to faculty members from Baruch College, Brooklyn College, City College, LaGuardia Community College, Lehman College and New York City College of Technology, whose hard work and dedication to their students were essential to making this program’s first year successful. Professor Mahdi Majidi-Zolbanin from LaGuardia Community College spoke about his experience with Calculus Boot Camp, particularly how it encouraged him to think differently about his approach to teaching calculus and ways of helping students grasp the concepts in a short time frame.

The Math Reception highlighted just two of the many ways that CUNY’s students and faculty are engaging with mathematics. Learn more about these and other math initiatives at CUNY.

53 Responses to Celebrating Mathematics at CUNY