Analysis of a Calculus Test – Part I

I gave a test a couple of weeks ago in my Calculus I class. The syllabus covered limits and derivatives. Among other problems, I always ask students to write down the derivative formulas and then give an assortment of derivative problems. Here is the relevant segment of the test: 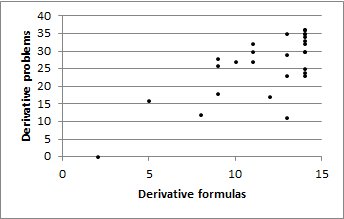 Without the outlier on the left, the correlation is 0.56, which is less, but still notable.

Would you say knowing formulas is predictive of solving derivative problems correctly on a test? Most calculus instructors would agree. It makes sense to commit to memory some of the routine formulas and rules, at least for the duration of the course, even if they are forgotten later. It becomes easier to participate in classroom discussions and speeds up doing the homework.

However, to answer the question more accurately I would have to give another class a test and allow them to have a  formula sheet. Then I could compare the test scores of the two classes to see if one class did significantly better than the other. And what if one class just happens to have stronger students than the other? Then I would have to repeat the experiment several times to draw a meaningful conclusion. Still, there may be completely unexpected lurking variables.

Nonetheless, here is a correlation and scatter plot for what it is worth. I like to see that group of points on the right end of the graph. It means there are a good number of students learning what I am expecting them to learn.

This entry was posted in Uncategorized and tagged Calculus, Learning Analytics. Bookmark the permalink.

515 Responses to Analysis of a Calculus Test – Part I