In every semester there are times when certain topics arise, and anyone now teaching (or enrolled in) Calc II must be dealing with infinite series.

Two things I like to present are Leibniz’s “arithmetic quadrature” of the circle:

Both of these series can be couched in excellent stories.  The Leibniz story can be found here, and for Ramanujan, there is his fascinating and incredible biography.

But the series are not really what has interested me for the last week–I want to discuss a book by George Shoobridge Carr, which Ramanujan studied as an adolescent. 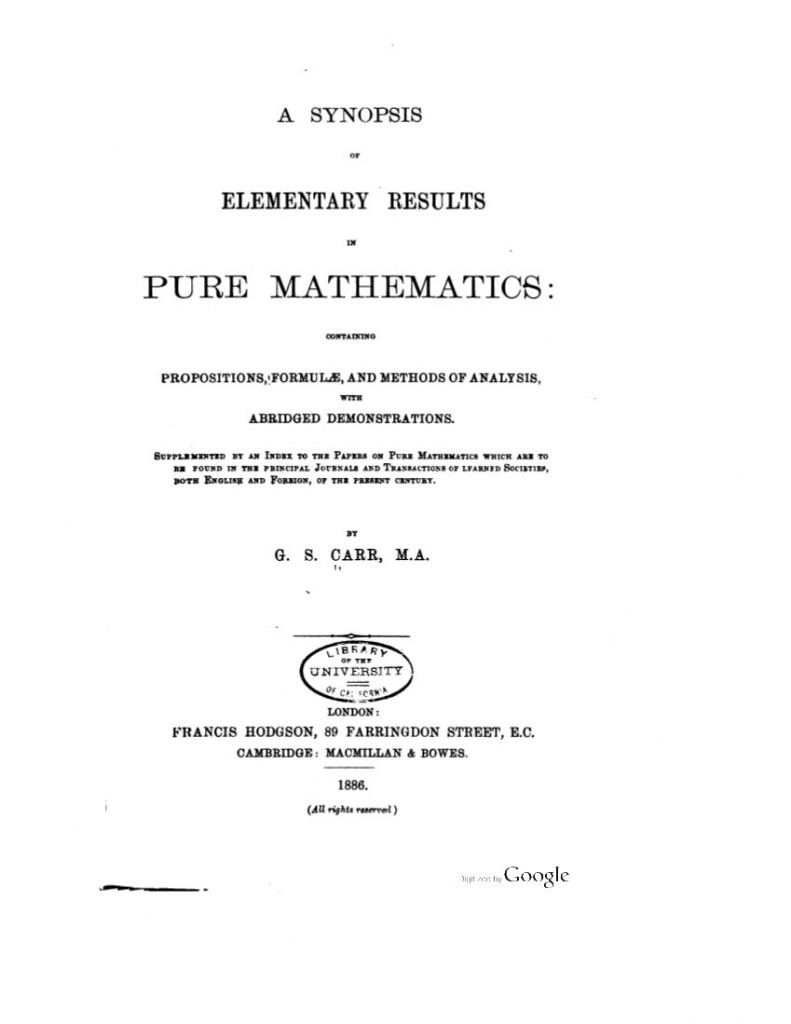 I first became aware of this book when reading The Man Who Knew Infinity, a few years ago.  This is a very good biography of Ramanujan written by science writer Robert Kanigel.  I feel compelled to quote the haunting first paragraph in Kanigel’s 2nd chapter:

It first came into his hands a few months before he left Town High School, sometime in 1903.  Probably, college students staying with Ramanujan’s family showed him the book.  In any case, its title bore no hint of the hold it would have on him:  A Synopsis of Elementary Results in Pure and Applied [sic] Mathematics.

George Carr’s book of 1886, which Ramanujan acquired at age 16, is a book of 5000 theorems, intended to be a study guide for the Tripos examination at Cambridge.  When I first read The Man Who Knew Infinity I found this transformational book very interesting. At that time I thought it unlikely that I would ever see a copy.  But last week I realized that the internet has provided one:  The entire book is freely downloadable from at least two different sources.

There is a copy available from the open library, and another (slightly more legible) version scanned by Google Books.

While Kenigel writes beautiful prose, he is not a mathematician.  In the ten or so pages he devotes to Carr’s book, he spends the majority of it proving Carr’s first formula, which happens to be for the difference of squares.  Nothing of the actual pleasure evoked by Carr’s book comes through.  But Carr’s book is wonderful, if only as a snapshot of mathematics education from a bygone age.

On pg 6 there are the square and cube roots of the numbers from 1 to 30, and a brief table of logs.  On the following page Burckhardt’s Factor Tables gives a factorization of all numbers from 1 to 990000.  Following this there is a table for the logarithm of the gamma function for

What we call “radicals” are charmingly referred to as surds.  Rather than the modern “

” for factorial, the symbol

is used. This and other typography recur eerily in Ramanujan’s handwriting: 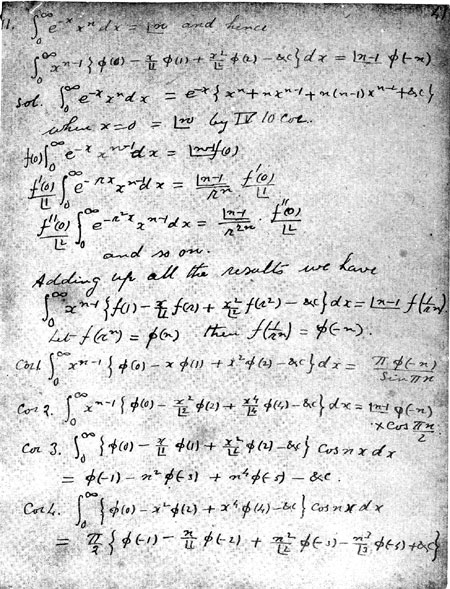 By contrast, Hardy was using the modern factorial notation when he published A Course of Pure Mathematics in 1908.

With the verbosity, color pictures, and general feeling of grinning desperation that accompany modern textbooks, it is refreshing to read material in Carr’s spare and simple format.

Many topics he treats, even in the first volume, are no longer covered in a typical undergraduate mathematics education.

And then, there is the actual influence the book had on Ramanujan.

While my knowledge of number theory is modest (okay, slight), even I can see links between the material in Carr’s book and the later work of Ramanujan.  There is a surprisingly large amount of material concerning

in Carr.  This function appears in a number of Ramanujan’s results, such as the Master Theorem, and the Interpolation Formula.  It also recurs many times in Ramanujan’s identities.

Carr includes a section on hypergeometric series, as well as a lengthy treatment of continued fractions, which were favorite topics of Ramanujan.  There is also a discussion of Bernoulli numbers, the subject of Ramanujan’s first published paper.