Outliers, Stereotypes, and Others’ Expectations with Professor Janet Liou-Mark

Posted on November 9, 2012 by Mari Watanabe-Rose 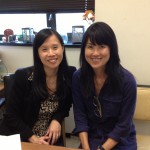 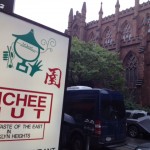 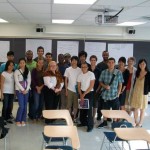 A meeting prolonged, trains delayed, and I ended up being 30 minutes late to arrive at the meeting spot in Brooklyn Heights. Waiting for me was Professor Janet Liou-Mark, waving and all smiley… outside in the rain! Professor of Mathematics and the Honors Scholars Program Director at New York City College of Technology, she has been awarded a number of research grants and scholarships. Professor Liou-Mark is described as having “such an inspirational attitude towards teaching and learning mathematics,” by one of her colleagues. Let me add to that description, “… and so, very, utterly kind.” Right. Brilliance and kindness are not necessarily incompatible.

As customary, I’d like to start by asking about your childhood. Were you born in New York?

No, I was born in Manitoba, Canada. It is where my father completed his doctorate degree. Then we moved to Brooklyn, where I spent my childhood. My father has been a professor of physics at Brooklyn College for 42 years, still teaching and very active in his research. My mother was a master tutor in mathematics at Kingsborough Community College for 15 years. She decided to retire to take care of my children when I joined City Tech. I liked mathematics and was expected to do well in it when I was a child, and had the full support from my parents necessary to succeed.

You’re a CUNY kid in the true sense! So, choosing a career as a mathematics professor was pretty straightforward for you?

It was not straightforward. When I went to New York University, I was unsure what I wanted to major in.  My parents encouraged me to continue taking mathematics courses even when I told them I wanted to be pre-med.  After an incident, I discovered that I could not withstand the sight of blood. This happened during my sophomore year and it ended my pursuit to be a medical doctor.  At that point in time I had already completed many of the mathematics requirements, so naturally I decided to declare mathematics as my major. During the summer before my junior year, I was fortunate to get an internship position—a job for graduate students enrolled in MBA programs. My supervisor had asked me to continue during the academic year.  Since it was expected for me to pursue a graduate degree, I wanted to see if the business world was for me. After working there for a year, it became clear that the business industry was not the environment I wanted to be in.  When the prospects of getting a doctorate in mathematics education at NYU were brought to my attention, I knew immediately that this degree is where my passion for mathematics and teaching can be combined.

Some parallels between your story and Professor Kathleen Offenholley’s are so intriguing… Please tell us your teaching philosophy.

My teaching methodology and philosophy are mainly shaped by my parent’s influences.  The passion for teaching mathematics came from my mother who received her Master’s degree in mathematics from Brooklyn College.  She taught me that students need to be independent thinkers, the importance of practice to gain mastery, and the necessity to show your passion in teaching mathematics so others can be influenced by it. She is truly a remarkable woman, and her patience can be compared to a saint.  She can be explaining the same mathematics problem over and over again, and her soft-spoken voice would not have even a trace of impatience.  My father taught me how to be a great teacher.  His meticulous and detailed notes depicted a teaching philosophy which is to never assume that the students have the sufficient background knowledge – spending a few minutes reviewing concepts will increase retention and persistence especially in mathematics and science courses.

How you describe your parents reminds me of “grit,” one of the hot topics in education nowadays.  More and more people believe that educators and parents should nurture children’s persistence and resilience to set them up for their long-term success, rather than focusing solely on the children’s current academic performance and test scores. Through modeling, your parents seem to have taught you how to be gritty, and how to teach students to be gritty. Now, you have a 16-year-old son and a 14-year-old daughter. How would you describe yourself as a parent?

I try not to become the typical Asian parent, or one of those “tiger moms”! I believe that children need to be problem solvers and critical thinkers. They should be encouraged to explore, to make mistakes, to find solutions, and to use their creativity.  I just tell them they have to try their best and with the knowledge that they gain, they need to pass it on to others, helping and assisting others as much as to their ability. My children are very talented in science and mathematics, but I will get upset when they do not do homework, though. When they get lazy, that is when I am on their case!

Speaking of tiger moms, I heard that your doctoral dissertation was trying to disprove the Model Minority Myth regarding the stereotype, “All Asians are good in math.” I re-read Chapter 8 of Malcolm Gladwell’s Outliers last night (which talks about Asians’ mathematics achievement), and as an Asian, I’m VERY interested to learn what you found.

That chapter of Outliers describes a study that used the Trends in International Mathematics and Science Study (TIMSS), and I used a similar data set from the National Education Longitudinal Study of 1988 for my dissertation on exploring the mathematics achievement patterns of Asian-Americans. Growing up, I noticedthat not all Asians are gifted in mathematics, but they were expected to do well, and they did with help from their teachers and parents. I was compelled to disaggregate the Asian-Americans in the study because many research studies would aggregate them as one group, generalizing their findings.  Important factors explaining mathematics achievement among the different Asian groups would be overlooked.  From my study I found not all Asian-American students perform alike.  When taking into account gender, generational status, home language, perceived parental involvement, reading achievement, self-attribution, and socioeconomic status, the mathematics performance from each group varied with each variable. Chinese-Americans and Korean-Americans performed better than Filipino-Americans, Japanese-Americans, and Southeast Asian-Americans. One explanation for this achievement was how students perceived their parent’s involvement in their success.  This research reinforces the fact that is important for parents of all ethnicity to have vested interest and to be actively involved in their children’s education, especially in mathematics.

Children’s academic successes, regardless of their race or ethnicity, require emotional and tangible support from adults. Now, let’s talk about one of your current projects. The Peer Assisted Learning Project won you the 2011 Chancellor’s Award for Excellence in Undergraduate Mathematics Instruction.

The grave results of pass rates in mathematics motivated me to create a program to assist our students from two fronts: supporting students in their mathematics courses and providing leadership development for STEM students (notably minority or at-risk). Many of these students enter college academically underprepared and lacking the necessary skills required for success. The Peer Assisted Learning Project is a modified version of the Peer-Led Team Learning (PLTL) instructional model where peers facilitate a group to work collaboratively.  I was introduced to this model by Dr. Dreyfuss who was at that time the project manager for the PLTL Dissemination grant at the City College of New York, and she now is leading this project with me at City Tech. By providing them with a culture of collaboration and by prompting them to integrate and transfer their knowledge, these students are better positioned to succeed in their academic life, especially in the STEM disciplines.

I understand you have many other projects going on as well… What are your favorite non-math-related activities? What do you do in your free time?

I do not really have any free time.  Aside from my full-time job, being a mother is also a full-time commitment.  I do love to scrapbook, and I have not done so in the past five years since I became involved with grants at the local and national level.

A recurring theme in our conversation was “fulfilling others’ expectations.” If her parents’ high expectation was one of the driving forces for Professor Liou-Mark to do well academically, that is consistent with the outcomes of many psychological research studies. Phenomena discovered in those studies including stereotype threat (one of the most recent publications on this is Claude M. Steele’s Whistling Vivaldi) show that (perceived) others’ expectations could affect individuals’ behavior and performance; specifically, high expectations derive high performance and low expectations derive low performance. But then, just last week, I read an article about a professional football player. When he was in college, he told one of his professors that he wants to play in the NFL. The quarterback recalls that the professor laughed condescendingly and told him he would “never make it,” and he used her remarks as motivation to achieve his goal. The article seems to hint why the professor’s low expectation led to his high performance, but should this case be viewed as an exception? Haven’t all of us worked hard to defy others’ low expectations and to show them “Who’s laughing now”? Obviously, my interview with Professor Liou-Mark was so stimulating, and now I’m surrounded by my old social psychology textbooks.

6 Responses to Outliers, Stereotypes, and Others’ Expectations with Professor Janet Liou-Mark