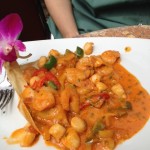 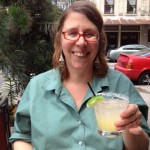 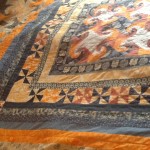 I have personally known Professor Kathleen Offenholley, Associate Professor of Mathematics at Borough of Manhattan Community College, only for a couple of months. Since Day 1, however, I have always been enjoying her laid-back manner and all-round knowledge, let alone her expertise in math and teaching. The moment I learned two of her non-math interests are karate and quilting (the photo above is of one of her creations), I became so determined that my next Math Blog interview would be with her. Finally, I met with Professor Offenholley at a Mexican restaurant in TriBeCa near the campus. The weather was so perfect that we ate outside!

Tell me about your childhood. Were you good with math when you were little?

I was born in Pennsylvania but grew up in Massachusetts. My parents are both scientists… they were physical chemists and faculty. So, talking about science and being able to do math was a norm and expected in my family.

It’s very interesting, although not surprising, that most of the professors I’ve interviewed had teachers and professors in their families. So, becoming a professor was sort of a natural path for you, would you say?

When I went to college, I was actually going to be a sociology major. But I became an after-school teacher while taking some time off from school, and I loved it so much that I decided to go into teaching. I thought about what I’d like to teach, and then decided to become a math teacher. I went back to school and redid all the math courses, so it took me a while to graduate from college, but it was fun.

Then you got a Ph.D. in math education from Teachers College of Columbia University. Tell me a bit more about your love for teaching.

Teaching is never routine. It’s always different and I like that. I think I first went into teaching because I like to explain things to people. But if you’re a good teacher, you don’t spend a whole lot of time explaining things. You think about what students could do so that they’re going to understand. At BMCC in my math department, about half of the professors have math education degrees and the other half pure math degrees. It’s a good balance because each has different strengths and qualities, and we can give each other good ideas.

I understand that you’re working on a project about gaming in math classroom.

It’s a relatively new thing and I like being on the edge of new things. I play a lot of games with my students… sometimes my original games, sometimes I use what I learned in a conference, books, and such. Games have elements of experiential learning, active learning, and collaborative learning, and I use games to convey math, of course, not just for the students to have fun. Last year, two of my colleagues at BMCC, Professors Crocco and Hernandez, and I were awarded a C3IRG grant (Community College Collaborative Incentive Research Grant) from CUNY Central office to do research on game-based learning. We just started data collection and analysis.

Can you give me an example of the games you and your students play?

I created bingo games. For example, one of them is a “hypothesis test” bingo. The bingo cards have words from my hypothesis test lecture, which is one of the hardest lectures for students with a lot of new vocabulary and concepts and all. During the lecture whenever I say one of the words on the cards, students cross it off on their cards, and they get to shout out, “Bingo!” in the middle of the lecture. Instead of being made desponded by the difficult topic, the students have a good time. And then they turn the bingo cards over, there’s a vocabulary-to-concept matching task. So the students actually have to pay attention to the lecture, not just play the game and have fun. They don’t leave the classroom being all sad and helpless. They leave feeling, “That was really fun,” and become ready to do the work to learn more.

Many psychology research studies have shown a positive relationship between excitement and memory, and the effect of gaming in classroom may be related to the results of such studies. It seems, however, that the use of games is sometimes criticized by other professors?

Yes! There is still a lot of misconception about gaming. Some people think I just jump up and down with my students and that’s all I do. Recently, one professor told me that playing games in classroom is not good because the students would then think it’s all about fun, and life is not fun… That’s really sad.

Life is not always fun, but life or math shouldn’t be all about pain! Now, speaking of fun, I have to ask you about your hobbies!

Two of my hobbies are quilting and karate; I’ve been quilting since my son was born… for 14 years, and karate for 24 years! As for karate, I go to a women’s karate school, which is a program at the Center for Anti-violence Education in Brooklyn. They teach self-defense to children, teens, and survivors of violence. I was going there once a week for a while, but now that my son is older, I get to go more often!

The keynote speaker of this year’s CUNY Math Conference, Dr. Caren Diefenderfer of Hollins University, was talking about crochet as one of her hobbies, or did she say she wants to take it up as a new hobby? Anyway, she was talking about the connection between crocheting and math, in terms of understanding patterns.

I remember Dr. Diefenderfer’s talk. She described crochet as “mathematical manifolds”! I think quilting, knitting… these activities are also related to math and help us to understand shapes and patterns. Math is all about finding beautiful patterns.

The two other female professors I’ve interviewed for the blog both mentioned knitting… That’s not a coincidence, I suppose?

We then talked about tapas bars, sangria, and also a bit about reading for fun; more specifically, about NOT reading for fun as much as we used to. Professor Offenholley said she had just started reading Murakami’s “1Q84,” which I finally started last week. It’s a huge book, and I wonder if she’s done with it by now. We may have an informal book club meeting sometime in the future.