I was wandering in my neighborhood bookstore this morning, when I came across a new edition of The Greek Myths, by Robert Graves.  Attracted by the cover, and my love of the Claudius series, I decided to bring it home.   Maybe this is a sign of unhealthy obsession, but the very first myth immediately put me in mind of mathematics.

The Pelasgian Creation Myth is already available on Amazon preview, so there can’t be much harm in my transcribing it here:

In the beginning, Eurynome, the Goddess of All Things, rose naked from Chaos, but found nothing substantial for her feet to rest upon, and therefore divided the sea from the sky, dancing lonely upon its waves.  She danced towards the south, and the wind set in motion behind her seemed something new and apart with which to begin a work of creation.  Wheeling about, she caught hold of this north wind, rubbed it between her hands, and behold! the great serpent Ophion.  Eurynome danced to warm herself, wildly and more wildly, until Ophion, grown lustful, coiled about those divine limbs and was moved to couple with her.  Now, the North Wind, who is also called Boreas, fertilizes; which is why mares often turn their hind-quarters to the wind and breed foals without aid of a stallion.  So Eurynome was likewise got with child.

Next, she assumed the form of a dove, brooding on the waves and, in due process of time, laid the Universal Egg.  At her bidding, Ophion coiled seven times about this egg, until it hatched and split in two.  Out tumbled all things that exist, her children:  sun, moon, planets, stars, the earth with its mountains and rivers, its trees, herbs, and living creatures. 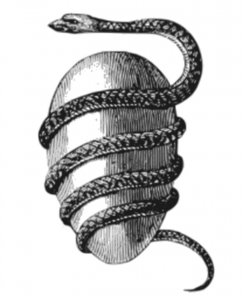 The reason this story interests me, apart from its inherent attractions and historical significance, is that it is a kind of existence argument.  Obviously it is completely implausible that the world began with Eurynome dancing for warmth upon the waves.  But at the same time, the story has a compelling logic to it — as you read it (in a certain state of mind anyway) the evolution of the plot makes sense.  The north wind came from Eurynome moving south–when grasped, it became a snake.  Since the north wind fertilizes, the snake Ophion and Eurynome were able to conceive the Universal Egg, which then hatched to produce all things that exist.

Those who consider it important that mathematics be founded on a self-evident logical base should experience discomfort when something that is patent nonsense from one point of view seems plausible from another.

In the beginning, the integers emerged naked from

.  The integers begot the rationals, and Dedekind cuts arose from the rational numbers.  The cuts ordered themselves by inclusion, and learned the operations of

from the rational numbers of which they were descended.  Next, a well ordering emerged from chaos and placed itself upon the Dedekind cuts, but, due to its great diffidence, hid itself in such a way that it could not be seen.

I appreciate that this “sociology of science” sort of argument can be irritating in the extreme.  To read Latour, for instance, is to desire to kill him: 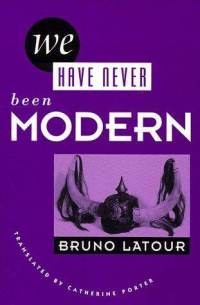 I am certainly not saying that there is no essential distinction between math and mythology.

Still, I do think there are non-trivial similarities between creation myths and foundational “explanations” of modern mathematics.  Both seem to be in sympathy with a natural feeling that we can better understand our world by knowing its origins, or the secret of its creation.

Ostensibly the purposes of foundational constructions in mathematics are not to explain per se.  The purpose of basing mathematics on various axiomatic systems, for instance ZFC, is to infuse the subject with greater rigor.  The added rigor is supposedly the result of reducing and clarifying the “unjustified” and undefined concepts which must be accepted without proof. Further, proofs following from formal axioms become purely combinatorial, and therefore, it is thought, more reliable.

But isn’t mythology also intended to reduce the multiplicity of unnecessary entities?  Isn’t that what makes it seem like an explanation?

There is definitely something about an axiom system that seems “explanatory.”  This is paradoxical, because the objects and relations which feature in any set of axioms are necessarily undefined.  Here is a stunning quote on this subject from Kurt Gödel (apparently in Mehlberg, Henryk. Logic and Language. Dordrecht: D. Reidel Publishing Co., 1962.)

The role of the alleged “foundations” is rather comparable to the function discharged, in physical theory, by explanatory hypotheses….The so-called logical or set-theoretical foundation for number theory or of any other well established mathematical theory is explanatory, rather than foundational, exactly as in physics where the actual function of axioms is to explain the phenomena described by the theorems of this system rather than to provide a genuine foundation for such theorems.

What does this mean?

One obvious interpretation of the quote is that axiom systems are vulnerable to empirical falsification — something different than the danger of internal inconsistency. In this reading, as Morris Kline puts it, “truth does not flow upward.”  The axioms are not the source of the validity of theorems–they are only plausible explanations of why theorems are empirically true.

This quote seems so unlikely coming from Gödel that Charles Parsons questioned its authenticity (for which I guess we have to trust Mehlberg).
At any rate the construction of axiomatic systems should not be trivialized.  To compare the construction of the reals with a creation myth belies the great technical difficulties involved in achieving such a construction.