Lately I’ve been playing around with the free software package SAGE, which does a lot of things mathematical.  Though I think most people will have heard of SAGE, let me give their mission statement as expressed on their website:

Sage is a free open-source mathematics software system licensed under the GPL. It combines the power of many existing open-source packages into a common Python-based interface.
Mission: Creating a viable free open source alternative to Magma, Maple, Mathematica and Matlab.

Though SAGE does everything under the sun and has the complexity of a flying saucer, I am mostly concerned with using it for teaching at the moment.  Below I’ll go over some neat things I’ve been able to do with the software.

If you’ve never used SAGE the first thing you’ll notice is that it’s a bit of a pain to get working.  The method I’ve had success with is downloading the source and compiling it from scratch.  That’s not as hard as it sounds, and for a lot of people it’s a piece of cake, but it’s frustrating to think that this will stop a lot of people from using this really amazing software.

If you are a Windows user and want to fully install SAGE, these steps might help.

Well, at least you can feel pretty cool when you finally run it and get the somewhat anticlimactic sage prompt greeting you from the command line:

So what do you do with that prompt?  The first thing you probably want to do is run the command

which will give you a slightly more graphical interface.  From there you can go on to use the control SAGE gives you to make the most beautiful mathematical plots you can imagine.

Look at this for example: 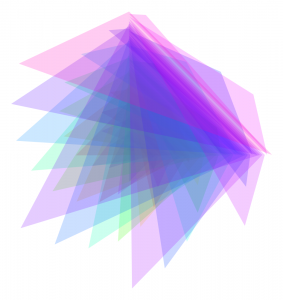 With this example and the others to follow, if you click on the image you can see the code used to generate it.  The above image is taken from an example in the SAGE documentation.

As a tool for making plots for exams, quizzes and notes (even textbooks?) SAGE compares very favorably with MAPLE.  (I have to confess I have very little experience with Mathematica.)  While SAGE lacks the “right click” easiness of MAPLE, certain things are more natural, mostly owing to the beautiful Graphics() object supported in SAGE.  These objects can be “added,” as shown below, to produce highly customized diagrams.

To give an example, suppose you want to show your students the area bounded by the curves

.  Then with the following commands, you get the picture below. 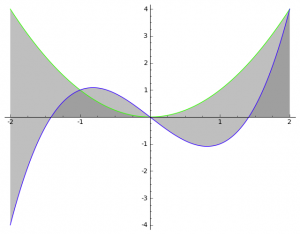 One thing that makes the usage natural is the way you can add plots (technically Graphics() objects) and delay showing them.  When they are “shown” they can be shown with a variety of options. 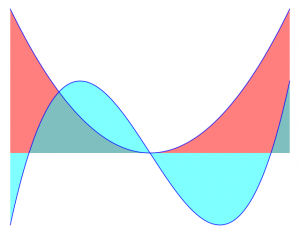 What’s more, it’s easy to export all of these things to a variety of file formats.

You may want to add text to your pictures (even LaTeX) as in the following. 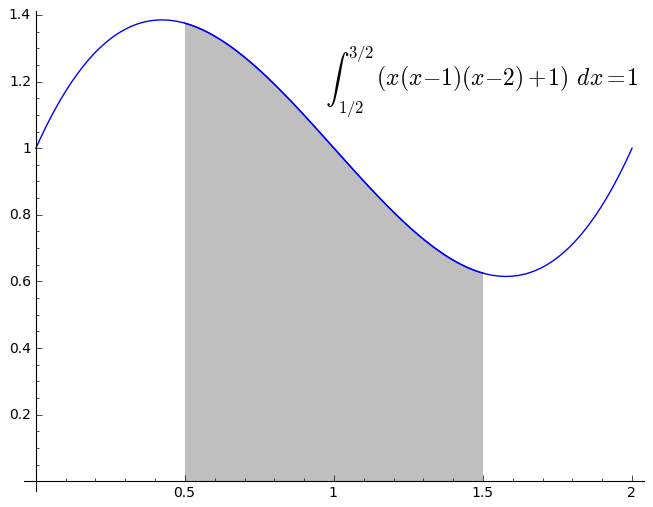 If you examine the code for the above image, you can see that the integral was automatically TeXed by SAGE, and plotted at coordinates that I was able to choose.

You can even control the rotation of text.

If you have to compute something onerous, you may want sage to do it for you, like in this example. 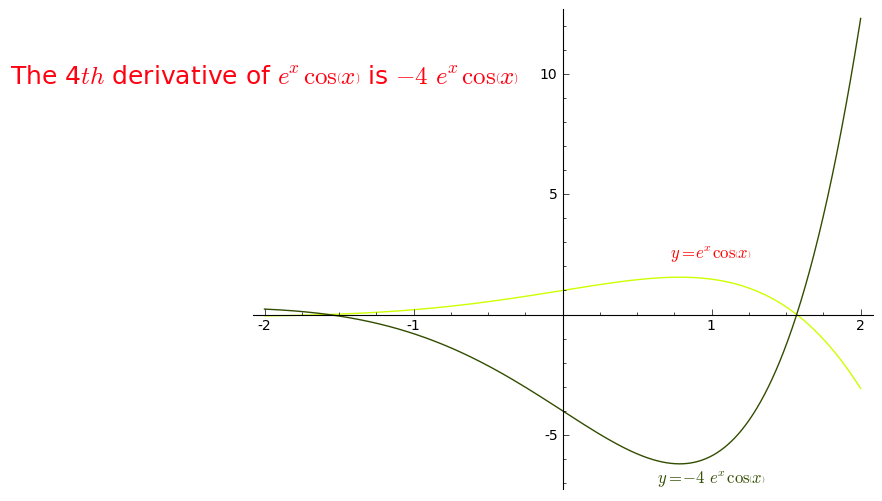 If you examine the code for the above image, you can see that it was SAGE which computed the 4th derivative of the function.  Note also that the label locations on the curves were plotted by using the actual functions!

More power is added to the graphing capability by using SAGE’s ability to iterate.  Here are the first 13 Taylor approximations to cosine around the origin:

If you examine the code for the above image you can see that the 13 Taylor approximations are not hard-coded, but rather produced by a repeat loop.  It would be a simple matter to make the number of approximations shown 130 rather than 13.  Also note that I am using the counter variable to control the transparency (ie alpha) of the curves drawn, so that the lines appear to become more solid as they become closer approximations.  The hues of the lines are also changing as a function of the counter variable, and produce a nice spring palette.

Something similar with hyperbolic tangent becomes a lesson in radii of convergence.  Here are the first 100 Taylor approximations to 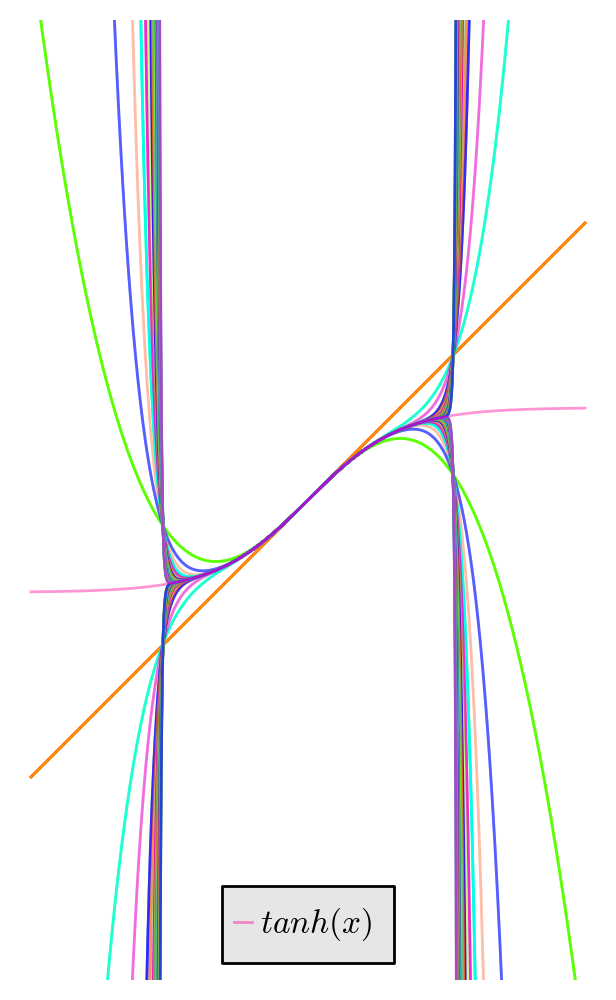 Though I have not done so, it would be simple to use iteration to make direction field plots of arbitrary resolution, for use in explaining differential equations.  This might even be a good (too challenging?) exercise for the students.

SAGE also supports 3d plotting.  The 3d image manipulation program works far better than the corresponding application packaged with MAPLE.  There is a way to import the resulting Java application into a web page, but I will just supply still images here: 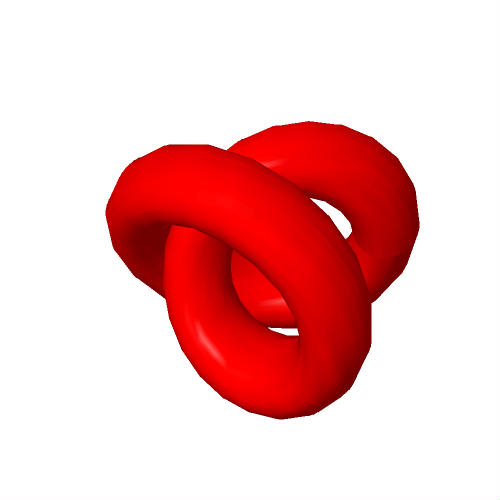 Still shot of a twisted torus

The ability to iterate can also be used to produce animations.  This capability is highly flexible, and can be used to make animated gifs, or even export movie files.

The secant line becomes the tangent

If you examine the SAGE code for the image above, you can see that the program is performing an intriguing kind of “continuous” iteration, in which all

are generated for a given

.  The motion tends to give me a headache, but I thought I had to show an example! Scroll down!

Lastly I wanted to say a few words about SageTeX. It is useful to be able to use SAGE from within LaTeX for the following reasons:

can be automatically generated.

The full power of SageTeX is nicely illustrated by a file called example.tex which can be found in

assuming you have succeeded in installing SAGE.

I can not help but editorialize that installing and using SageTeX took me approximately 4 hours of hair tearing frustration — it is comparable in difficulty to capturing the pegasus.

Only those with a fair amount of Linux expertise are likely to accomplish this goal, so let me briefly list some lessons learned in unabashed jargon.  I will not touch on anything covered in the instructions given in the above website, but explain a few things which were *not* covered.  Everything is with reference to Mint, but I assume Ubuntu is sufficiently similar that the following are still relevant.

Technical problems aside, SAGE is an amazing software package, which has many applications.  The fact that it is freely available means that it is not only free to us, but also to our students.  When showing our students how to accomplish a technological feat we frequently have to choose a platform to teach them on (eg Linux vs Windows).  There are ethical arguments which can be made that we are obligated to instruct them on the “most free” platform so that they are not “born dependent” on technology produced by a particular company.  I believe this point carries water, but even if you disagree there are purely utilitarian reasons to teach our students on open source platforms when possible:

As I have said above, the cost of getting started in SAGE is relatively high, but I believe the technology is ultimately superior, to MAPLE at least.  There are the open source/ free software arguments which can be included as a bonus incentive.