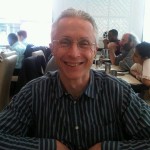 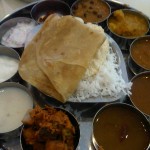 Professor Laurence (Laurie) Kirby at Baruch College has a couple of places in cyberspace, including his faculty bio, his own website and blog, to express his interests. Skimming through their contents, I got my eye caught by the sentence, “What is the relationship between language and reality?” posed in his bio as one of his research questions. Although what was primed in my mind (e.g., “Can the word ‘sad’ fully represent the reality of ‘sadness’?”) seems to be quite different from what he has been studying (the relationship between “the formal ‘language’ of arithmetic and the ‘reality’ of the structure of the natural numbers such as 0,1,2,3, etc.”), finding such a philosophical question in a math faculty bio was highly intriguing.

First of all, thank you for recommending this restaurant for our interview. I was looking around and having a sneak peek of what people are eating. The food looks amazing! This is what I was hoping for because Gramercy (where Baruch College is) is known for a plethora of good Indian restaurants.

You’re welcome. It’s a bit noisy but this place has good food.

Do you like and are you willing to try all kinds of different food?  Reading in your bio that you got your degrees from Cambridge U and Manchester U, I’ve gathered you must be from the UK.

That’s correct, but I was actually born in Hong Kong. My father was Professor of Economics at Hong Kong University. We were there until when I was 12 and then moved back to England.

Hong Kong! Do you think that early experience cultivated your curiosity and interests in different cultures? I read in one of your blog posts about cultural differences in “how people draw a triangle.” It was fascinating.

I think my experience in Hong Kong had a large influence on me. And yes, when told to draw a triangle, most of us will draw an equilateral triangle with the base on the horizontal axis. Eleanor Robson in her article Words and Pictures says that in ancient Mesopotamia, people would draw an elongated triangle with the base on vertical axis.  She argues that even a basic concept like triangle is, in part, culturally determined.

It’s great that a math professor is interested in lots of things other than math also… traveling, eating, literature, and such. You’re also a musician. What instruments do you play?

I play the violin and piano. The violin is my instrument, though. My mother would play the instrument and as a child I really wanted to be able to play it. I had a very strict but good teacher. Now I sometimes play at a local bar/restaurant, and I actually will on this St. Patrick’s Day.

That’s super! By the way, what’s the difference between the violin and the fiddle?

Musicians’ attitude. The instruments are basically the same.

So you’re a fiddler with an attitude?

I can see that what you are have been enormously influenced by your professor father and musician mother. You also had a good violin teacher… How about math teachers?

My math teacher in high school was probably the best teacher I had.

Did she or he influence you a lot in terms of choosing math for your profession?

Not at all (laugh). I always wanted to be a musician!

Okay (laugh)… Going back to your family, you and your wife both play music and you have two sons, who are college students now.  What do your sons want to be when they grow up?

I don’t know, but they both play music. The younger one is a drummer in a heavy metal band (laugh). The other one writes and plays music. He has a good taste for music, too, like the Beatles and…

Timeless! I love them. I have lots of their albums on my iPod.

I actually saw them play! They came to Hong Kong when I was 11.

Talking about his plans to visit his family in Manchester and other cities in the UK this summer, he told me that his family there consider him too “Americanized” (he has been with Baruch for 30 years!). To me, he appeared to be a very well-mannered and quiet Englishman, but then again I didn’t get to elicit his persona as a fiddler. I may need to go see him play music sometime.