Posted on February 6, 2012 by Mari Watanabe-Rose 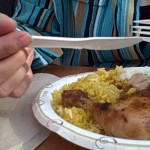 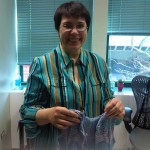 Always soft-spoken, warm, and welcoming, Professor Marina Dedlovskaya is Associate Professor of Mathematics at LaGuardia Community College. She was a PI of a CUNY Improving Mathematics Learning grant winning project and that is how I met her more than 2 years ago. She and I had a little conversation at a cafeteria in LaGuardia’s E-Building.

You told me that many women knit in your hometown. Where is it?

I’m originally from Orenburg, Russia. It’s right on the border between Europe and Asia, on the Ural River. I was a math teacher there, working for a high school and a college. I then became interested in pure math and got a doctoral degree from Moscow University.

Did you like math as a young student? Tell us a little bit about your childhood and your family.

Yes, when I was a child, I liked math and physics. I decided I liked math better because my math teacher was better than my physics teacher. My mother is a medical doctor, but her parents were both teachers: My grandmother was an elementary school teacher and my grandfather was a PE teacher who became a principal. My uncle, my mother’s brother, is a literature teacher.

Was becoming a teacher a natural path for you because there are many teachers in your family?

I would say so. I chose to go to a university in my hometown, Orenburg State Pedagogical University, because my parents didn’t want me to move out.

You got married in Russia and came to the US in 2001… and have an 8-month-old daughter now! How’s your family life in New York?

My husband and daughter are both good. He used to be a jazz guitarist and is enjoying jazz in New York. We have a lot of guitars and CDs… tons of them in our house! He and I watch a lot of movies, too. Of the ones we saw recently, I liked “Red State.” I was a little disappointed by “Midnight in Paris” though.

Since I’m a non-math person, I have to ask you more non-math question. What’s your favorite word?

It’s hard to say. Since I’m a math person, I never thought languages were something to think about. I used to think they were only tools. Now, because my native language is Russian and I had to learn English, I appreciate languages more and understand how complex and sophisticated they are.

Okay, now, back to math. Tell us about your love for math.

Math is a special language. When you learn a new language, you start with alphabet, then grammar, which is boring and doesn’t show you much. But later, when you have a certain foundation, you can enjoy literature and you can write and express yourself. Math is the same. In the beginning, you have to learn rules and other basics and you may think: Why do I have to do this? But later, you can enjoy different mathematical structures and become able to answer more questions. They’re like puzzles you have to solve to open a big picture. They’re beautiful.

In math, there isn’t much room for subjectivity. If two people understand one thing, they’re on the same page. I believe that’s part of the beauty of math.

I agree.  In Russia, during the Perestroika time, my friends and I always said, “2 plus 2 is always 4 in decimal system, regardless of the political climate of the country.”

We went on to talk more about math, mostly about the “Mathematics Across the Curriculum (MATC)” project conducted at Dartmouth College. Math was taught in the context of humanistic disciplines such as Art, Music, Philosophy, History, and Literature, by collaborative teaching teams. These MATC courses made math more “relevant” for students, and had positive effects on the students’ learning, motivation, and confidence. Professor Dedlovskaya, along with English Professor Karlyn Koh at LaGuardia, conducted a similar project called “Humanistic Mathematics: A Scholarly and Pedagogical Exploration” as a part of their CUNY Faculty Development Program.

23 Responses to Chicken and Rice with Professor Marina Dedlovskaya