Congratulations to the thousands of students across CUNY who earn degrees this month, many of them in math.  This interview features one graduate, Mayte Rojas.

AT: Mayte, first of all, congratulations on your graduation!  You earned a Master’s of Science degree in Mathematics from City College.  How does it feel to accomplish this?

MR: I feel empowered having been able obtain an MS in Mathematics from City College.  At the beginning of my graduate career, I felt both intimidated and excited to be able to start this new journey at City College, but having been able to overcome any fear that I had at the beginning of this journey and fully enjoying my learning experience here at CCNY until the end is amazing.

AT: You were an undergraduate math major at College of Staten Island.  What drew you to math in the first place?

MR: I was first drawn to math in middle school when I learned algebra. I felt as if I had just gained a magic power being able to solve for an unknown variable. Compared to other classes, I appreciated the clear structure of math.

AT: What was the best part, academically, of your experience at City College?

MR:  The best part has been able to study under very diverse professors. As a minority, one can’t help but to find inspiration in those who have already accomplished so much.

AT: There are a lot of initiatives these days about diversity recruiting into STEM fields.  What is your perspective on this as a Latina in the math world?

MR: I think that this recruitment will be very successful because I believe that being Latina helped shape my interest in math. I believe that there is already a lot if interest in STEM fields among diverse populations, and with the right support at the right time this interest will flourish.

AT: Mayte, you mentioned before how your professors inspired you. You also teach undergraduate courses at CUNY, and I’m sure you’re an inspiration to your students.  Thanks for sharing your thoughts for this conversation. 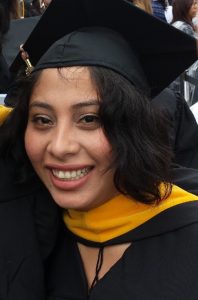