Posted on September 24, 2014 by Mari Watanabe-Rose 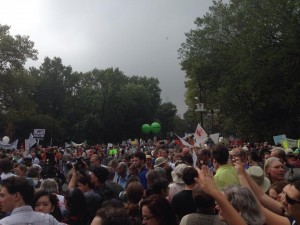 This past Sunday, did you see hundreds of photos from the People’s Climate March posted on your friends’ Facebook and kick yourself for having a lazy afternoon on your couch (as I kind of did)?

The New York Times reported that, on September 21, approximately 311,000 people participated in the March in New York City. The article said that the number was “… provided by 35 crowd spotters and analyzed by a mathematician from Carnegie Mellon University…”

There seem to be at least a few different ways of counting crowds, many of which use a basic “area times density” principle. They include the classic technique developed in the 1960s called the Jacobs Method, and updated, more accurate methods such as Yip and Watson’s.

While 311,000 was more than enough to make me wonder why I didn’t join this historic event, the event’s organizer claims that nearly 400,000 marched. There is no way to know whether this discrepancy comes from simple errors, or public relations motives. Or is there?

Professors: Do you think you can use this topic in any of your math classes? If so, in which course and how?

(Photo courtesy of Professor Jonathan Cornick at QCC, who was one of those Facebook friends)

46 Responses to The Climate March Math